Charlotte and Luke were both living in London at the time of meeting in July 2012. The Olympics were about to begin and London was really a hive of excitement.

By pure chance, they both attended a music festival in Kings Cross and happened to be in a queue for cider at the same time when they first met. Luke opened with the snazzy line: “Hi I’m Luke, I sell cheese” and Charlotte immediately thought “You had me at cheese”!

Luke was working in central London managing a cheese store and Charlotte had been working in TV and film. Although their worlds were very different, they both shared obsessions with food, drink, quality, attention to detail and making people smile.

As the year’s past, they bought their first home together, welcomed their first child, got married and wondered “what’s next?”. They decided that they really wanted to create their own business and it had to be food and drink related. Both Charlotte and Luke were very keen cooks. They used to spend their free time in London wandering around the markets of London and seeking out the more unusual food that London had to offer.

Charlotte and Luke spent years fleshing out ideas, going into incredible detail, testing recipes, but nothing seemed to fit quite right for them. The couple felt that London was a very saturated market and they’d be better off moving to a rural area and starting a food/ drink business.

Luke was working such long hours and Charlotte was raising their young daughter, so this made house hunting tricky. They thought the best answer was to take annual leave and hit the search for a new home. After a quick conversation with Luke’s mother (Amanda), Charlotte decided to apply to be on BBC 1’s Escape to the Country. They were immediately accepted over the phone and had the camera crew over to their London home to film them.

The following month they went to stay on the Norfolk/ Suffolk borders with the BBC film crew, in search of their dream home. A few months later, they’d sold their house and moved up to a beautiful village on the borders.

Charlotte was pregnant with their second child by this point, so they decided to take some much needed family time out and work really hard on their business idea.

Luke had attended a famous food festival and had a lightbulb moment after seeing a family running a coffee trailer at the event. He decided the way forward would be to have a coffee trailer, selling one product that is the best of it’s kind and Charlotte (of course) said there has to be cocktails too (she’s a cocktail making fanatic)!

The pair had a long think about what product they could “own” and Charlotte recalled his mother (Amanda’s) famous brownies. The first time Charlotte met Amanda, it was at a family birthday party. Amanda would always bake a tray of brownies for whoever’s birthday it was and she’d spent years and years perfecting the best brownie recipe ever. This formed the basis of what we now know as our signature Triple Chocolate Brownie today. Charlotte could never forget this chance meeting because she polished the whole tray of 16 brownies off (and she could still do it again to this day)!

Thrilled with their decision, they then spent around 6 months baking tray after tray of brownies, creating hundreds of cocktails and making more cappuccinos than you’d care to count. During this time, they also searched the length and breadth of East Anglia to find the perfect horse trailer to convert for their mobile cafe bar. They stumbled upon Beryl (their horse trailer) and lovingly restored her.

After several months of blood, sweat and tears, they were ready to launch their new venture. They were very fortunate to have a fabulous local brewery in their village which was holding a Shakesbeer festival at the very same time that Beryl would be finished. It was like the stars had aligned yet again!

On the day of launch, nerves were rife! They’d perfected everything they could think of and they were finally ready to welcome customers. It was an incredibly proud day for them both. Moving from London to rural Suffolk without jobs to go to is not for the faint hearted, but they were determined to make their dream a reality.

It wasn’t all “brownies and rainbows” at this point. There were some very tough business lessons to be learned. Occasionally at events, they’d make less than the pitch fee. Also at times Luke’s reversing skills meant he cost himself more than he earned.  The trailer (or their car) lost body parts, but they were so passionate about what they do, they ploughed on regardless.

They spent the summer touring playgrounds with their pop-up cafe. It was a wonderful adventure, but it was time for a new challenge.  So they put their heads together and decided that a permanent pitch outside a local train station was the way to go. They spent the autumn of 2019 working with Greater Anglia Trains to find the perfect spot.  They decided on a launch of 29th January 2020 as their date.

Well… it doesn’t take a genius to work out how this idea worked out… Launching at the end of January, they were immediately hit with Storm Chiara. They had a few “snow days” written into their business plan, but absolutely nothing of this scale. Almost immediately after that, they were then hit with the entire family going down with a very serious, mystery “respiratory flu” which we all now commonly know to be Covid.

Both Charlotte, Luke and the kids were hit badly by covid.  At the time there were rumblings of a terrible virus sweeping China that could be on its way to the UK. Just three weeks before lockdown, they took the decision to close Beryl’s hatch temporarily over concerns for their families’ health. They were told by medical professionals that it was impossible that they could have already had Covid as they hadn’t traveled to Wuhan. So frightened for their already (massively) weakened immune systems, it seemed the best option.

The three weeks that they closed were some of the hardest weeks in their life. Still recovering as a family from a terrible illness, they were trying to navigate how they can make money given that they were fast approaching a “lockdown” scenario. Charlotte then had a lightbulb moment: “why don’t we do some doorstep deliveries of brownies, they were always really popular?”. Luke thought Charlotte had lost her mind, but he also understood how desperate she was to help her family’s situation. He agreed and she posted a note in their local community Facebook group and hoped for the best.

Within 3 days, Charlotte was travelling all across greater Anglia, from North Norfolk, through to Cambridgeshire, Essex and Suffolk with her brownie boxes. It was a simple model, people would message her on social media and she’d deliver the brownies the next day to your door, whilst Luke stayed at home baking tray upon tray of brownies.

Fate bought them another new side to the business!

Things were definitely a struggle and sometimes Charlotte would be lost for hours, driving around the east of England. On one such occasion, Charlotte popped into a post office to get some help with directions. She found them so incredibly kind and helpful, she went into the car and gave them a box of brownies as a thank you. A couple of hours later she received a phone call from the owner of the post office (Robbie). He said he loved the brownies so much, he’d love to sell them! And so the wholesale business was born!

The business took off so well that after a couple of months, Charlotte was really struggling to take orders. She was on the road constantly, pulling 20 hour days, whilst Luke was sometimes getting a couple of hours of sleep a night AND looking after 2 very young kids.

Something had to give as this was not remotely sustainable, so Charlotte got a website built and they decided to move onto a postal delivery model. They had never done anything like this before and there was a LOT to learn.

At the same time as they launched the postal service, the BBC called again about appearing on a revisit version of Escape to the Country.  They jumped at the chance to film with their pal Jonnie Irwin again. 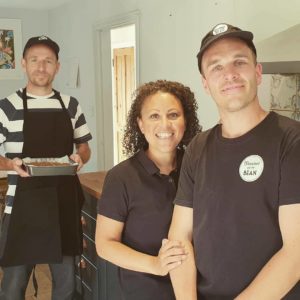 The BBC came over and spent the day filming. Charlotte and Luke had no idea (at the time) when the programme was set to air. To their luck, the programme aired in the last week of November. This gave an enormous boost to their Christmas sales. Thousands of people took to the website to place orders. Charlotte and Luke are very happy to say that a lot of those people are still great customers of theirs.

Luke has also expanded the range of baked goods to include a wide variety of cakes and fudge. Their products are delivered all across the UK via post.

They are so incredibly excited about what the future may bring. For them, the excitement lies in the journey of building their empire!

To find out more about their journey, please click here.

Read about them in the press:

We use cookies on our website to give you the most relevant experience by remembering your preferences and repeat visits. By clicking “Accept All”, you consent to the use of ALL the cookies. However, you may visit "Cookie Settings" to provide a controlled consent.
Cookie SettingsAccept All
Manage consent

This website uses cookies to improve your experience while you navigate through the website. Out of these, the cookies that are categorized as necessary are stored on your browser as they are essential for the working of basic functionalities of the website. We also use third-party cookies that help us analyze and understand how you use this website. These cookies will be stored in your browser only with your consent. You also have the option to opt-out of these cookies. But opting out of some of these cookies may affect your browsing experience.
Necessary Always Enabled
Necessary cookies are absolutely essential for the website to function properly. These cookies ensure basic functionalities and security features of the website, anonymously.
Functional
Functional cookies help to perform certain functionalities like sharing the content of the website on social media platforms, collect feedbacks, and other third-party features.
Performance
Performance cookies are used to understand and analyze the key performance indexes of the website which helps in delivering a better user experience for the visitors.
Analytics
Analytical cookies are used to understand how visitors interact with the website. These cookies help provide information on metrics the number of visitors, bounce rate, traffic source, etc.
Advertisement
Advertisement cookies are used to provide visitors with relevant ads and marketing campaigns. These cookies track visitors across websites and collect information to provide customized ads.
Others
Other uncategorized cookies are those that are being analyzed and have not been classified into a category as yet.
SAVE & ACCEPT