Well the people of Diss came, saw and BOY were they fed well! We’ve never been to Diss Carnival before, so we didn’t know what to expect for our first ever visit. Our friends Connor and Dave (Florenco’s Coffee and Harris’s Hog Roast) told us that it’s their busiest event of the year, but with the economic crisis and rising numbers of covid, we had no idea about what was ahead of us!

We had a little disaster with the fudge cookies (never without drama) as some of them exploded in the oven! Whoops! We managed to salvage enough to take with us, but some of them ended up in the “whoopsie bin”. For those of you who don’t know, the “whoopsie bin” is what we refer to as the aesthetically challenged creations that Bean Daddy makes. We don’t actually put them in a bin (far from it).

Arrival time for traders was 8.30am and we arrived bang on time. We only bought the cinnamon rolls with us this time around as Bean Daddy still had more baking to do before we opened up. It took us around an hour to get the gazebo up and start setting up our display. Bean Daddy quickly whipped back to the Bean Bunker to crack on with the baking, whilst I did the finishing touches.

Bean Daddy arrived back to the pitch with an abundance of brownies, Scotch eggs and cookies! It then took us about another hour or so to get the display just perfect. Bean Daddy is most definitely the merchandiser out of the two of us. He spent years working in retail and has a keen eye for how things should look!

Just as we’d got ourselves sorted, I spotted a marching band coming towards us playing “Crazy in Love”, so I knew the carnival was passing through. At this point, scores of people walked past and the carnival was flooded with glitter and smiles (my ideal kind of day really). The theme for the carnival was: Greatdiss Showman and the costumes were spectacular. We saw all sorts of circus performers, trapeze artists, stilts walkers… it was tremendous!

Our postie Stuey popped by to say hello, he was driving the local fire department’s fire engine in the precession. You won’t believe this, but he’s not only our local postie, he’s also our local fireperson! He’s a real life Postman Pat (circa Special Delivery Service era). 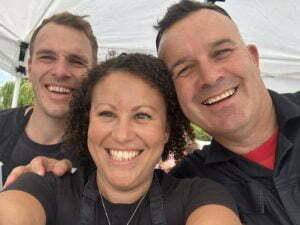 After this point, we sold more brownies, cinnamon rolls, cookies and Scotch Eggs than we’ve ever sold! We couldn’t believe it! Bean Daddy was replenishing the stock as fast as I was selling it! We had an queue for a couple of hours and it was lovely to see so many familiar faces!

We sold out very early on, but we’d had a great day, so no regrets! In fact, we’re already planning for next year! Who knows what the theme will be!

Diss, you were amazing! See you next time!

If you’d like to come along to one of our events, please check out our listings on this page.

To find out more about our business and how we got started, please click here.

We use cookies on our website to give you the most relevant experience by remembering your preferences and repeat visits. By clicking “Accept All”, you consent to the use of ALL the cookies. However, you may visit "Cookie Settings" to provide a controlled consent.
Cookie SettingsAccept All
Manage consent

This website uses cookies to improve your experience while you navigate through the website. Out of these, the cookies that are categorized as necessary are stored on your browser as they are essential for the working of basic functionalities of the website. We also use third-party cookies that help us analyze and understand how you use this website. These cookies will be stored in your browser only with your consent. You also have the option to opt-out of these cookies. But opting out of some of these cookies may affect your browsing experience.
Necessary Always Enabled
Necessary cookies are absolutely essential for the website to function properly. These cookies ensure basic functionalities and security features of the website, anonymously.
Functional
Functional cookies help to perform certain functionalities like sharing the content of the website on social media platforms, collect feedbacks, and other third-party features.
Performance
Performance cookies are used to understand and analyze the key performance indexes of the website which helps in delivering a better user experience for the visitors.
Analytics
Analytical cookies are used to understand how visitors interact with the website. These cookies help provide information on metrics the number of visitors, bounce rate, traffic source, etc.
Advertisement
Advertisement cookies are used to provide visitors with relevant ads and marketing campaigns. These cookies track visitors across websites and collect information to provide customized ads.
Others
Other uncategorized cookies are those that are being analyzed and have not been classified into a category as yet.
SAVE & ACCEPT